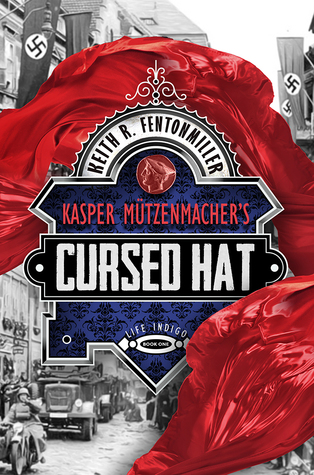 One sentence summary: Hat maker Kasper Mützenmacher owns a magical hat linked to Greek gods, there is a man who steals faces, and Nazi Germany is rising.

Everything came at a cost, Kasper supposed, including love.

This was one of the wackiest novels I’ve ever read. The synopsis had really intrigued me – set in Nazi Germany, a hat seller with a hat that can teleport him anywhere he wishes gets caught up in a mystery involving Greek Mythology and a man who steals faces – but I think this book fell victim to too much content, and poor execution of it. Honestly, a lot of the time I wasn’t sure where the plot was even going.

I was drawn in by this book because I’m always interested when an author weaves fantasy into any kind of historical event(s). But when an author brings together two genres, I need to be convinced of both of them. The magical hat and Greek mythology plotline I did like and enjoyed the construction of, but sadly the plot that surrounded the use of history I found unrealistic, and that’s where my biggest gripe with this novel lies.

This book spans the early 1920s Germany through 1960s America. The plot seems to regurgitate history, but doesn’t demonstrate a good understanding of the culture of it. The book begins with “the greatest prank ever played on the Nazis” that consists of convincing a group of them to drink beer and and drunkenly sing ridiculous songs in English they believe propagate German’s supremacy (uh, what?). Phrases like “what the heck” were used in chapters set in the 1930s. Geobbels, a Nazi and one of Adolf Hitler’s closest associates, says, “It would be a shame to soil such fine work with Jewish fingers. No offense.” Not only is “no offense” such a modern phrase, but a Nazi politician would never say that, never mind one of Hitler’s right hand men.

I found this book heavy handed on social issues and handled them a bit too modernly for the time periods the book finds itself in. It deals with prejudice against Judaism, sexuality, gender, black racism in America, and issues with Catholicism, to name a few. These were at times dealt with idealistically, and preachy about how they were discriminatory and wrong. If a book shows me something is wrong by the actions a character or group takes, it doesn’t also need to tell me. So many social issues were thrown at me in this book, it felt like the narration was shouting at me “I am modern and open minded!” and it clashed with the history and the outward actions of the characters at times.

The plot also dealt with family relationships, romantic relationships, and the mythical curses that bound them all together. By the time I got to the second half of this book, my eyes began to skim. This novel had so many ideas and tackled so many issues, but it just became too much for one book.

I had a hard time getting a grip on Kasper. He always seemed to mean well, but was rather all over the place and angered so easily that that I grew confused. The narration told me that he was pretty modern on things concerning sexuality, gender, etc., but then he would act terribly in regards to allowing his daughter to do things and have talents that might overshadow his son, and was often judgmental toward women. He also experienced one of the most instant cases of of insta-love I’ve ever seen. I did like his son, Duke, who experiences a roller coaster of an identity search throughout the book, and his strange, sympathetic Nazi friend, Dieter.

Klaus, the man who takes women and makes them forget their faces, seemed like imposing figure, but he never really struck fear in me, and I felt like he had much more potential as a bad guy, particularly since he was so hyped up in the synopsis of this book.He did undergo character development, but it would have felt more significant if I’d been more fearful of him at the start.

The writing was decent, but there was a lot of telling instead of showing. I often felt that information that should have been held off – backstory, explanations for certain plot points – were told too soon, and suffered cases of info dumping. Large passings of time were often summarized, and things I sometimes would rather have been summarized were drawn out in-scene (i.e. selling hats to customers).

A lot of the dialogue felt too modern for the eras this book is set in, and it often took me out of the moment I was reading. Overall, I felt that the structure and execution of this book could have been cleaner.

With the fantasy aspects, I think so, though I would have liked more of it. With the historical aspects? No. This story was very inventive, but it was just too much for me.

* Thanks to NetGalley and Curiosity Quills Press for providing me with a copy of this book in exchange for an honest and unbiased review.