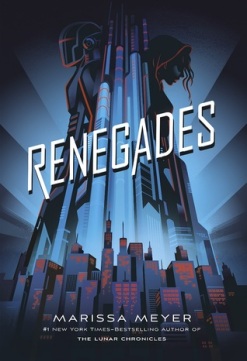 Summary: The Renegades protect their society from danger and the villains who once ruled the city- the Anarchists. Nova has a reason to hate the Renegades, and she is on a mission for vengeance. As she gets closer to her target, she meets Adrian, a Renegade boy who believes in justice—and in Nova. But Nova’s allegiance is to a Anarchist who has the power to end them both.

The more I thought about this book, the more dissatisfied I’ve become with it. I really, really wanted to enjoy this book. What I loved about Meyer’s Lunar Chronicles is how innovative they are- I’m generally not the biggest fan of fairy tale retellings, but I was blown away by the fresh take she delivered with that series. Likewise, I’m really not a fan of superhero narratives, so I was eager to see what kind of originality she would deliver with Renegades. And if all else failed, I was at least confident that Meyer would have some new characters for me to love.

Sadly, I was let down on both of these accounts. To be fair, if you’re a big fan of superhero narratives, this book may work much better for you, but unfortunately I didn’t find anything particularly invigorating about the plot. It was full of typical superhero tropes and cliches that could have been saved by interesting characters, but even though the characters were perhaps more diverse than I’ve seen in previous superhero stories, I never found their dynamics to have quite enough depth to save the plot for me.  I was never wowwed by plot twists – whatever was revealed to me, I was never surprised or impassioned by it. It was all so…typical.

Meyer tries to blur the lines between justice and morality in the actions of the Renegades and Anarchists, but I didn’t find it to be anything new. It all felt very basic, like this was a first or second draft in which Meyer was still trying to discover her deeper ideas. Nova would wrestle with her emotions and principles, but she always dealt with them on such a basic level and settled them so quickly (she came to care for the Renegades way too fast and it killed a lot of the tension for me), I never felt very attached to her conflict.

Perhaps my biggest complaint, though, was that this book was very slow and much longer than it needed to be. Again, something I so admired about Meyers execution of the Lunar Chronicles is how concise they are – the world building is worked into the action and interactions of characters, but so much of Renegade‘s development was just…told to me. And it was told to me slowly. Scenes were too long and plot points took too long to happen and reveal themselves, and I started skimming by the end.

It wasn’t entirely bad. I was entertained at times. The world building and setting reminded me of The Incredibles, which is perhaps the one superhero movie that I like. I particularly liked the powers Meyer chose for her main characters- those were very unconventional, creative, and not always the most advantageous. It was a colorful book with potential- I just wished it had gone deeper.

I mean…I liked Adrian? He was sweet and I found his powers interesting and he felt the most fleshed-out to me. Nova was okay, but basically felt like a more vengeful version of Cinder to me. Everyone else felt rather flat, which shocked me, seeing as how well developed Meyer’s characters are in her previous books. It took me a long time to really adjust to all the side characters, because none of them particularly stood out to me. I don’t think I ever had a clear picture of them in my head. Again, I must say it felt like this book needed another draft to flesh them out more.

I really wanted to be given more insight into the characters who didn’t quite fit the superhero mold. I understand that this is a series and perhaps it will all be coming later, but it felt needed to me. Adrian’s dads, for example, are part of the original Renegades, and the book makes a point to say that they’re gay and people had their views on it, but…TELL ME MORE. That’s the innovation I was craving- characters who aren’t your typical superheroes and how they deal with being different, how they succeed or fail. Tell me more about Oscar and being a Renegade with his disability. Tell me more about literally any of these characters that differs from we always see in superhero narratives. Anyone could have been more nuanced. I will say I liked Max though- he was very interesting. I’d love to know more about his experience with his powers. Make him my main character.

And lastly- the romance. I’m sorry but………….I didn’t care. I did not. Care. I felt little chemistry between Nova and Adrian, and their immediate attraction to each other was bleh. Their conversations bored me. They felt like the obligatory main characters who fall for each other because that’s just how the story goes. It SHOULD be interesting, given their opposing sides and their differences, but the way Nova flip flops on her feelings for Adrien felt so surface-level and I was just………..not interested. Hard pass.

I was really surprised by the quality of the writing in this book, because it felt so much less than that of all of her previous books. The humor fell flat, the descriptions were too long, the pacing was far too slow, the dialogue was corny, inner ruminations were too repetitive, I felt very little tension in the plot and between characters. The action scenes felt…slow and too mechanically written. This book needed another draft…I know Marissa Meyer has the talent!! The writing quality is where most my disappointment lies with this book, because I’d been so impressed and inspired by it in her previous works.

Maybe if I had more interest in superheroes it would have gone down better, so take my opinion for what you will. I will say that. But even without that I found this book rather sloppy, lacking in depth, cliche, and far, far too slow. There was a lot of potential and I liked the creative nature of it, but I doubt I’ll read the sequel.