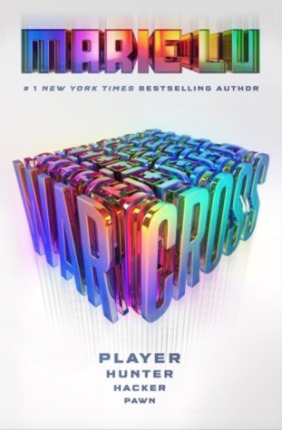 Summary: Emika Chen is drowning in debt when she accidentally glitches herself into the opening tournament of the biggest game in the world, Warcross. Convinced she’s about to be arrested, a bigger shock comes when she receives a phone call by the game’s creator, Hideo Tanaka, asking her to spy on the inside of the game this year instead.

Imagine wandering through the most realistic virtual Paris ever, or lounging in a full simulation of Hawaii’s beaches. Imagine flying through a fantasy world of dragons and elves. Anything.

I’m conflicted about Warcross, but let me start by saying that I totally see the greatness of it. I loved the themes, the fun, and I loved the color and creativity. I’d seen this book get great reviews, but I was tentative about it because I’ve never really been into video games too heavily, but it looked fun, so I wanted to give it a chance. I set my expectations to a relative neutral level, but the story and the universe drew me in pretty quickly. This book is so vibrant. The descriptions, the settings, the main character herself is a rainbow of color. Everything was so pristine and vivid, Lu paints such a great futuristic universe.

My downfall was…as I expected, the video game stuff didn’t really click with me. I have nothing against it – there are video games I enjoy playing – but I’m not really into video games, and unfortunately the extended game scenes were where I found my eyes glazing over. I’ve never been much of a person for action scenes of any kind, anyway, but this is definitely a case of “it’s me, not you,” because those scenes were certainly well done.

I must say it was the romantic plot that I struggled with the most. I wanted to enjoy it, I thought I would enjoy it when we were introduced to it, but…it just never really took off for me. It started a bit too quickly for my taste, and to be honest, I just wasn’t as into the characters as I wanted to be.

The main plot wasn’t anything I found ground-breaking, and I did end up predicting the plot twists, but I really liked the predicament Emika finds herself in – the choice she’s faced with – at the end. The themes surrounding pain and violence were done really well, and to see how that plays out may just be why I pick up the second book when it comes out.

As I said, I wasn’t as into the characters as I wanted to be. I liked Emika a lot at the beginning, but as the book went on I found myself frequently more annoyed by her? She was good at things a little too quickly and too easily, and it took a bit of tension and development out of her character for me.

Hideo….I really wanted to like him, I almost did, but…I found him pretty dull. He was mysterious and reserved and I know that was supposed to peak my interest for him, but instead I felt like I was repeatedly checking my watch, waiting for him to reveal his deep dark past so we could get on with it. Which didn’t shock me, after all that. Actually, everything surrounding him was pretty easy to predict.

I liked Emika’s team a lot, but felt like I didn’t get enough time with them. I would have traded some of the romance for them. To be honest, the only character dynamic that REALLY caught my interest were Roshan and Tremaine. Perhaps I’ll read the next book for them.

The writing was vivid and pretty and colorful, but I did feel like the pace could have been a bit faster. There was sometimes too much description, too much explanation, at times, and I felt myself dragging. But other than that, there really isn’t much to criticism- this book was very well written.

This book was vivid and colorful, and I liked a lot of what the plot did, but the video game stuff is where I didn’t click with this book. That, and I just wanted to be a bit more interested in the characters. Was worth a read, though! Perhaps I’ll pick up the next one.